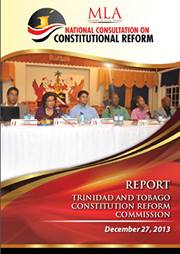 “Several of our groups’ stakeholders and others in our communities participated in and contributed to the national consultations throughout 2013, where we noted the dominance of two concerns we share deeply:

a) the weakness or ineffectiveness of mechanisms for government and institutional accountability; and

b) that particular groups advantage members of their own unfairly, and respect for human dignity is selective and not universal.

Chapter 1 of the Consultation Report opens with observations about the vulnerabilities of citizens in small states to majoritarian democracies; that in Trinidad & Tobago “the state has emerged as a an agent of victimization”; and cites the need for more rapid development of a “a culture of scrutiny of public officials by dedicated institutions that are expected to play an enquiring role” (paras. 21-22, p. 6). These are fundamentally issues of human rights, an area in which the Commission Report, unfortunately, proposes no amendments to the Constitution (p. 13), and a dimension in particular need of strengthening in our national “political culture”, the concern with which the Report concludes.

We urge the following:

Both fellow states and domestic civil society advocates have called for Trinidad & Tobago to establish a world class national human rights institution (NHRI). The standards for such an entity are established in United Nations General Assembly resolution 48/134 of 20 December 1993 (the “Paris Principles”). These include:

and specific functions a NHRI should play:

The Office of the Ombudsman, included among our constitutional institutions, and responsible for investigation of administrative injustice, is widely cited by government as Trinidad & Tobago’s human rights institution. Not only is it “viewed as an ineffective institution” and “Parliament does not take it seriously” (para. 225, p. 36), the Report notes, but it is not accredited as compliant with the Paris Principles and recognised as such by the Office on the United Nations High Commissioner for Human Rights. Recommendations for review of the Ombudsman’s function in a new Constitution should be at minimum to establish an internationally recognised NHRI.

Trinidad & Tobago’s and other early Commonwealth Caribbean constitutions immunised all colonial law from the guarantees of the new nation’s Bill of Rights. Although such a blanket approach to “saving” older laws has been modified in the design of Caribbean constitutions since 1973 (either by being eliminated or by being considerably narrowed in scope or duration), savings provisions which cynically protect from the Constitution all law that pre-dates the Constitution were both retained and updated in in Section 6 of Trinidad & Tobago’s 1976 Republican Constitution.

The Commission’s Report provides no discussion of the basis of its recommendation of continued retention of the saving of laws prior to 1976, or what public policy rationale this might serve. Saving laws from constitutional review undermines the very purpose and intent of constitutional rights protections. “The very existence of such clauses and their interpretation is perhaps evidence of the fear of self-determination inherent in Commonwealth Caribbean legal systems”, writes Trinidad & Tobago’s Prof. RoseMarie Antoine, the Dean of the University of the West Indies at St. Augustine Faculty of Law and a current member of the InterAmerican Commission on Human Rights. Constitutional scholar Margaret Burnham also writes, “The savings clause takes back with one hand what the fundamental rights provisions are meant to give with another, rendering ordinary laws more sacrosanct than the constitution to which they should be subordinated. The clause requires constitutional jurists to ignore the very constitutional protections they are charged with enforcing.” Constitutionalism, she argues, cannot survive so long as savings clauses preempt basic rights. “What is left is a constitution without constitutionalism, an instrument with no true normative message or predictive value.

3. Formal Recognition of Lesbian, Gay, Bisexual and Transgender [LGBT] Persons
in Respect of Their Ultimate Right to Feel a Genuine Sense of Inclusion in the Society

Recognition of Human Rights Concerns. We salute the Commission for understanding the human rights implications of sexual orientation; for framing the fundamentals of the issue so clearly in the words of the Report we cite in the caption above; and for acknowledging and grappling so directly with this issue, raised by so many participants in the consultations, in ways almost no other public body has had the mettle to. Paragraphs 56-62 of the Report demonstrate that the Commissioners clearly grasp that:

Competing Schools of Thought? Para. 62 of the Report refers to “competing schools of thought” on sexual orientation. No evidence is given in the document, however, of any credible opposing views to those represented in the Report, other than bias and prejudice.

Existence of Consensus: Human Rights Norms. Para. 60 of the Report further suggests that “there is no consensus on the issue of sexual orientation” as a protected ground of discrimination. Such protection is in fact a human rights norm, as has been repeatedly articulated by the United Nations’ Secretary General, High Commissioner for Human Rights and Human Rights Council. The 2012 UN publication Born Free and Equal summarizes this consensus in accessible terms. Protections from discrimination and human rights violations based on sexual orientation and gender identity have also been the focus of Organisation of American States General Assembly consensus resolutions supported by Trinidad & Tobago for each of the past six years; and sexual orientation, gender identity and expression and bodily diversity are a targeted focus of the InterAmerican Commission on Human Rights, for which a Caribbean national serves as rapporteur.

State Undertakings. Since March 2012, officers of the state have repeatedly made the clear statement that “Government seeks to recognise the human rights of all citizens, which includes the Lesbian, Gay, Bi-Sexual and Transgendered (LGBT) community”. At the Universal Periodic Review before the United Nations Human Rights Council in October 2011, Trinidad & Tobago also committed to “undertake proactive policies to promote the rights of individuals, especially with regard to their sexual orientation…” and to “increase measures to ensure that violence and discrimination against members of vulnerable groups, such as women and lesbians, gay, bisexual, and transgender persons, are both prevented and prosecuted”. On 4 June 2012 Trinidad & Tobago voted for Organisation of American States General Assembly Resolution AG/RES. 2721 (XLII-O/12) Human Rights, Sexual Orientation, and Gender Identity. Among commitments the states hold themselves to are:

Majority Opinion. No country which prides itself as respecting human rights and dignity allows a majority to decide on minority rights. As Chief Justice Ivor Archie reminded in his address at the opening of the 2012 law term,

Permit me to quote Dr. Eric Williams as we stood on the brink of a new experiment in democracy as an independent nation:

Implicit in the last sentence is the notion that a constitution does not merely express the will of the majority, but it also protects the weak and the minority against the tyranny of the majority. Popularism is often inimical to the human rights of minorities.

The apparent proposal in the Report that majority consensus on minority rights is a test for state recognition of minorities’ rights is odious and shames the Commission. In oral testimony at the Report consultation in North Trinidad, we made the point that “The idea that we need to wait on consensus before active leadership is taken on this issue is repugnant to justice and supports the notion that rights can be held hostage to the prejudices of other people until those prejudices change.”

The proportion of survey participants who voluntarily indicated a homosexual or bisexual identity was 3.4%, and those who declined to answer the question 6%. Therefore, the estimated size of the national population of LGBT persons is similar to or larger than several ethnic and religious minorities afforded heightened protection from discrimination under the Constitution. According to the 2011 census, Caucasians, Chinese, Indigenous People, Portuguese and Syrians/Lebanese combined constitute less than 1.25% of the nation. Methodists, Orisha and Presbyterians number between 0.5% and 2.5%; and Anglicans, Muslims, Seventh Day Adventists and Spiritual Baptists between 4% and 6% each.

Bucking consensus. The current government (in whose last term in office the Equal Opportunity Commission was created to lower the threshold to access to redress for discrimination; common-law relationships were given state recognition; and the anniversary of the decriminalisation of religious shouting was designated a national holiday) has expressed clear aspirations of taking further leadership on social protection, in contrast to remaining beholden to consensus. In a written voluntary commitment to the United Nations Human Rights Council on 1 March 2012, Government boldly stated: “The issue of discrimination based on sexual orientation is one which remains a matter of concern in the forefront of the minds of” the government, and boasted that “Trinidad and Tobago is seen as a leader in the region in relation to the manner in which it addresses the changing needs of its population. While this issue may be the subject of much public debate it is not one which will be ignored.”

Report Recommendations. We applaud and wholeheartedly support the Report’s recommendation for increased public education and national discussion on matters of sexual orientation and human rights. This is how discriminatory attitudes are dismantled. The People National Movement government’s initial gender policy made this identical recommendation a decade ago.

However, in the face of its manifest understanding that LGBT persons are a national minority group subject to disparate treatment, its grasp of the types and costs of such discrimination, and its recognition of the value of enumerating protected statuses in the Bill of Rights and the modern trend towards expanding constitutional protection of rights, the Report’s conclusion that ‘divisiveness’ warrants a continued lack of constitutional recognition of sexual orientation, respect and inclusion of LGBT persons in Trinidad & Tobago betrays the Commission’s mandate for leadership and positions it as taking the side of bias and prejudice.

Constitutional guarantees of human rights protection are far from abstract concerns. The Report catalogues the many weaknesses of Parliamentary decision-making. Legislators err. Constitutions provide a critical backstop for such failures. In 2012, despite the appeals and abstention of the entire Independent bench of the Senate, the Parliament of Trinidad & Tobago in landmark child protection legislation (the Children Act) voted to increase the penalty for genital sexual intimacy between minors of the same sex close in age to life imprisonment, while decriminalising similar acts between minors of the opposite sex. Minors of the same sex were expressly carved out of the decriminalization provisions (§§20(1)(c), 20(2)(c) and 20(3)(c)), subjecting them to the same punishment as adults. In 2000, enacting a novel anti-discrimination statute (the Equal Opportunity Act), Parliament did the same thing, explicitly excluding “sexual preference or sexual orientation” from the definition of statuses the law protects, notwithstanding the concerns of five Independent Senators.

These are two compelling examples, simply in the case of LGBT citizens of Trinidad & Tobago, of why human rights protections must be guaranteed more strongly at the constitutional level by

The Constitution Reform Commission’s work can leave as a legacy for future generations a Constitution with mechanisms, and not merely language, that ensure human rights and equal protection for all under the law.

We commend these three proposals to the Commission.