On March 5 & 6, 2009 American Christian Right evangelist Scott Lively is a key speaker at an anti-gay conference in Kampala, Uganda and meets with legislators.

On October 14, 2009 Ndorwa West MP David Bahati introduces a private member’s bill in the Uganda Parliament that would institute capital punishment for some homosexual acts. 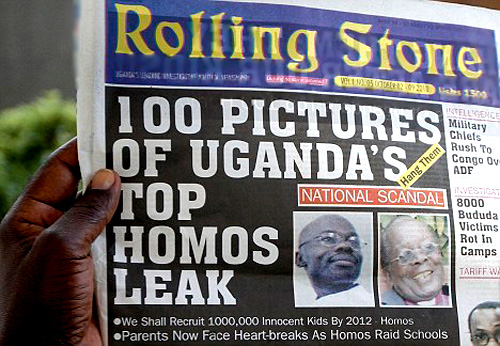 On January 3, 2010 Kato and two others win damages (US$650) in a court case that enjoins the paper from further outing. The victory is reported as “Rolling Stone ruling – finally a ray of hope for gay activists in Uganda”.

On January 27, 2011 Kato dies after being bludgeoned in the head at his home. The Uganda police spokeswoman Judith Nabakooba says they don’t believe this is a hate crime: “It looks like theft…some things were stolen”.

Who killed David Kato? Val Kalende, Board Chair of Freedom & Roam Uganda thinks “David’s death is a result of the hatred planted in Uganda by US Evangelicals in 2009. The Ugandan Government and the so-called US Evangelicals must take responsibility for David’s blood!”

One thought on “Who killed David Kato?”