We wrote our Government. We faxed. We called. We e-mailed. The Foreign Ministry. The UN mission. We thought we could rely on the People’s Partnership campaign promise that “foreign policy and its implementation must be guided by the principles of good governance, i.e. transparency, accountability, participation and effective representation”. Or their commitment to foreign policy objectives that pursue “the sustainable human development and human security of all the people of T&T”. Or their plan to pursue six targeted priorities  at the UN, one of them human rights.

But no one could tell us how our country would vote when the UN decided yesterday whether to restore a reference to sexual orientation in a resolution about protecting people from being killed for who they are. A bloc of Arab and African nations had got narrow support to remove the specific reference in a committee vote in November. Trinidad & Tobago had abstained then. The vote had received a lot of negative attention.

Other than St. Lucia, every other country in the region changed its vote on the issue in a positive direction when pressed to take a stand for the second vote yesterday. A majority of Caribbean nations – Antigua, the Bahamas, Barbados, Belize, Dominica, the Dominican Republic, Grenada and St. Kitts-Nevis – voted Yes to including attention to sexual orientation in the resolution! And Jamaica and Belize sent clear messages to their GLBT communities well before the vote that they would not oppose the inclusion of sexual orientation. Aren’t you proud? Of Caribbean governments. And of the calibre of GLBT advocacy in the region.

But we’re a bit ashamed of our own government. The nation with one of the most vibrant GLBT communities in the region – and, we’re sure, gay Members of Parliament – sat on the fence and abstained, again. What reason could we have; and who will explain it?

However, to our delight, an African nation has a lesson for us. Rwanda understands how critically important human rights are, and what extrajudicial executions mean. And their UN delegation told their colleagues what cynically leaving sexual orientation out of the resolution for political or “cultural” reasons would do. Imagine if our Government had shown international leadership like that: sigh! Read below or listen at 01:16:39. 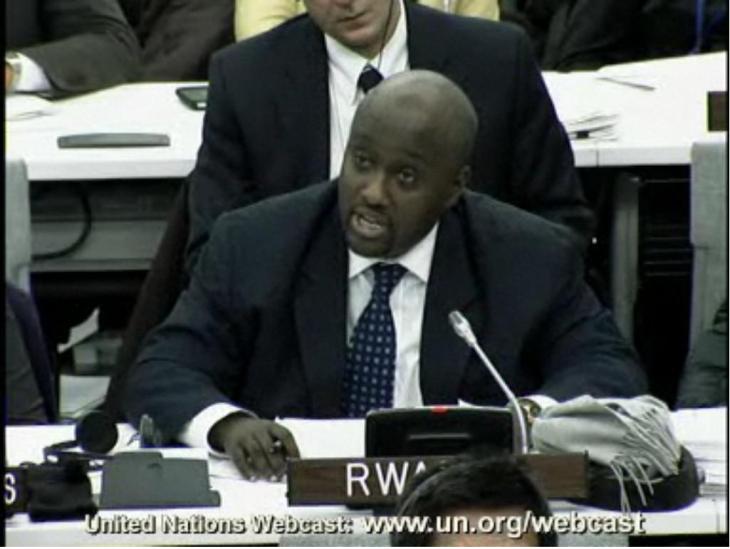 Olivier Nduhungirehe, First Counsellor at Rwanda’s Permanent Mission to the United Nations, explains his country’s vote in the General Assembly on December 21, 2010 to support an amendment restoring sexual orientation to the language of a resolution condemning extrajudicial, summary and arbitrary executions.

Thank you, sir, for giving me the floor. Rwanda would like to explain its vote on this amendment submitted by the United States.

Sexual orientation, sir, is a concept which sparks very animated debate in the international level, at the national level, even within our families. It relates to our respective cultures, our way of living, or our religions. This debate generally relates to the definition of this concept of sexual orientation, also the criminalization of such practices, and family rights that have to be granted to people who have a different sexual orientation. This is a complex issue, and no definitive decisions have been taken internationally, and within states or even continents there are very conflicting, seemingly irreconcilable positions. Rwanda feels that sexual orientations of our compatriots is a totally private matter where states cannot intervene, either to award new rights or to discriminate or criminalize those who have such an orientation.

But the matter before us now is very different, sir. Here the General Assembly of the United Nations is called upon, not to grant family rights to people with a different sexual orientation, not to give an opinion on the criminalization of such practices, but to decide whether such men and women have the right to life. Sir, in listing specific groups such as national or racial or ethnic or religious or linguistic or even political or ideological or professional groups, the authors of this resolution on extrajudicial, summary or arbitrary execution have clearly wished to draw attention to high-risk groups that are frequently the target of murder, assassination or execution. We wish to alert states to the vulnerability of such groups and the reality of the crimes committed against them, and to call for prosecution of authors of such acts. Whether or not the concept is defined or not, whether or not we support the claims of people with a different sexual orientation, whether or not we approve of their sexual practices – but we must deal with the urgency of these matters and recognize that these people continue to be the target of murder in many of our societies, and they are more at risk than many of the other groups listed. This is unfortunately true, and recognizing this is not a call to give them special rights; it’s just recognition of a crime, that their fundamental rights, their right to life should not be refused. But to refuse to recognize this reality for legal or ideological or cultural reasons will have the consequence of continuing to hide our heads in the sand and to fail to alert states to these situations that break families. Believe me, sir, that a human group doesn’t need to be legally defined to be the victim of execution or massacre, since those who target their members have previously defined them. Rwanda has experienced this sixteen years ago indeed, and for this reason our delegation will vote for the amendment, and calls on other delegations to do likewise.

(b) To ensure the effective protection of the right to life of all persons under their jurisdiction and to investigate promptly and thoroughly all killings, including those targeted at specific groups of persons, such as racially motivated violence leading to the death of the victim, killings of persons belonging to national or ethnic, religious and linguistic minorities or because of their sexual orientation, killings of persons affected by terrorism, hostage taking or foreign occupation, killings of refugees, internally displaced persons, migrants, street children or members of indigenous communities, killings of persons for reasons related to their activities as human rights defenders, lawyers, journalists or demonstrators, killings committed in the name of passion or in the name of honour, all killings committed for discriminatory reasons on any basis, as well as all other cases where a person’s right to life has been violated, and to bring those responsible to justice before a competent, independent and impartial judiciary at the national or, where appropriate, international level, and to ensure that such killings, including those committed by security forces, police and law enforcement agents, paramilitary groups or private forces, are neither condoned nor sanctioned by State officials or personnel;