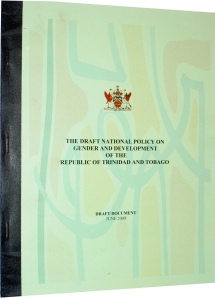 The Ministry of Community Development, Culture and Gender Affairs solicited public comment on the Government’s draft of the National Policy on Gender and Development, which was released to the public in September; and responses were due last Sunday, February 28. Over the past six months, CAISO took a detailed look at the draft, participated in forums and discussions on the Policy, and reviewed comparisons between it and the document widely circulated in 2004 that is now described as the University of the West Indies-St. Augustine Institute for Gender and Development Studies consultants’ report.

Speaking as “a voice for gay, lesbian, bisexual, transgender and intersex (GLBTI) Trinidadians and Tobagonians”, we submitted a 1,400-word commentary on the new document last week. Friends for Life also submitted comments.

CAISO’s key message is that our Government cannot shirk its responsibility to set clear domestic policy to address the concerns of the tens of thousands of GLBTI citizens of Trinidad & Tobago.

Rather than offering a laundry list of things to fix or add in the Policy, or listing scores of places where our issues were omitted, we made just five very feasible proposals for changes to the document that Government could take as a first step to setting national policy on sexual orientation and gender identity issues:

We offered again to sit down with the Ministry, and hope we will meet with the Minister herself and with other Cabinet-level decisionmakers to discuss how we work in partnership on these issues.

2 thoughts on “Government must set policy for its GLBT citizens’ needs: CAISO comments on the Gender Policy”